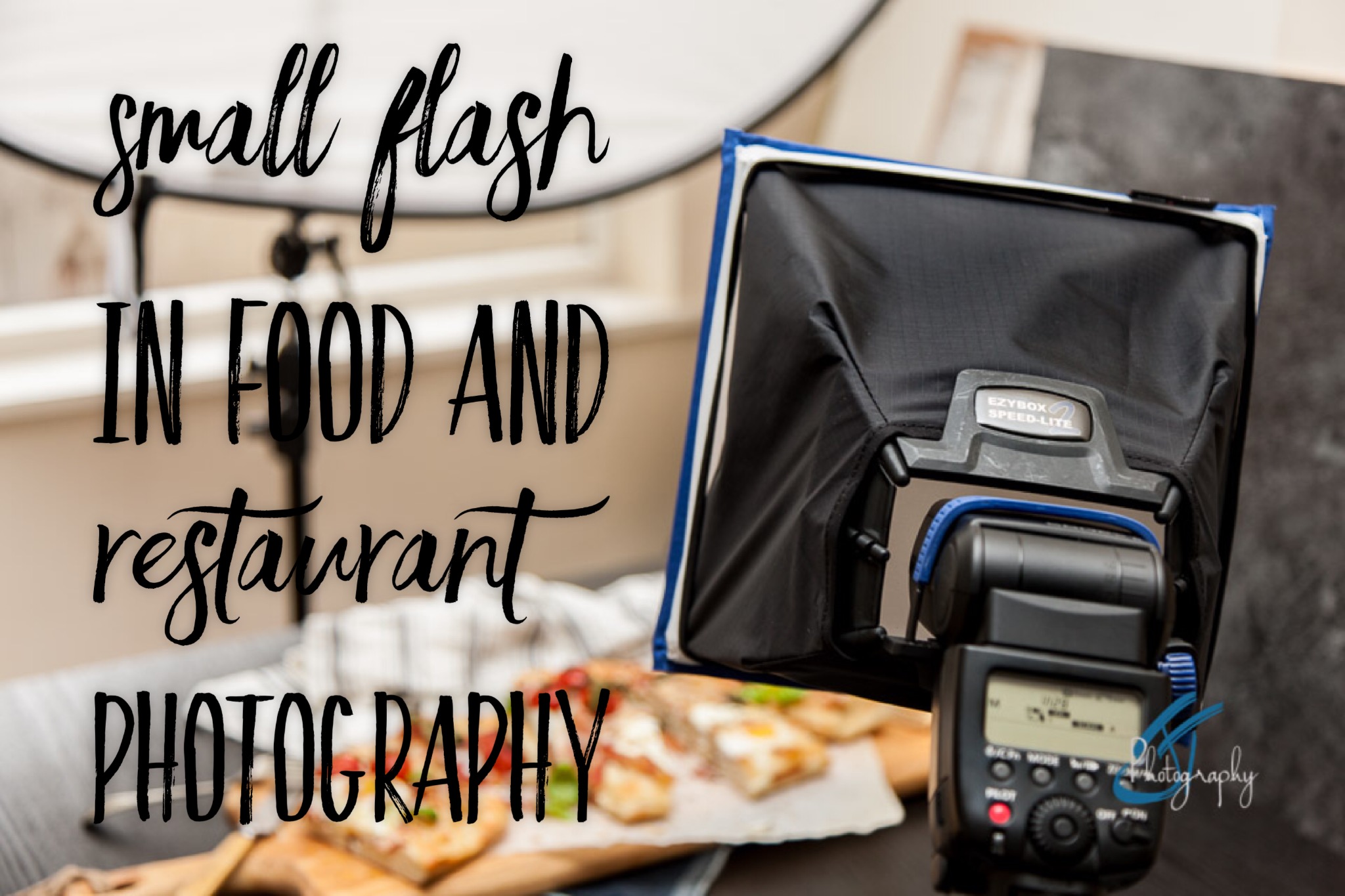 Why I choose small flash for my food and restaurant photography

Howdy Doodly Doo folks. Today I’ll share with you what kind of flash I use and my general thoughts behind my choice. What the benefits and drawbacks are as well as how I use them. Ultimately I want you to have some understanding of my choice. This way you can apply it to your own situation and make a better judgement as to which direction you will go in.

Let me just say this… Light is light, whether it comes through a window, Speedlite, studio strobe, work lamp or car headlight. Understanding light is worth getting hung up on, not the source or brand of said source.

One more thing for those who care… I will be spelling Speedlites like this, that’s how Canon spell it and that’s what I use. Nikon has Speedlights, not sure about the rest. My spell check doesn’t like it, but then it’s corrections have gotten me into trouble more than a few times, so an elbow to spellcheck can’t be a bad thing 🙂

I use Canon Speedlites, currently, I have three 580 EXii’s, so not the newest, latest kit like the 600 EX RT and not a whole lot of it. There are a few variations for you to choose from. The main competitors seem to be the lovely and cheap Yongnuo’s and the more expensive Phottix systems. Of course, if you shoot Nikon, Sony, Fuji or whatever, they have their own flash for their system. That’s something to bear in mind when you buy your kit. You’re buying into a system. Make sure you like it. 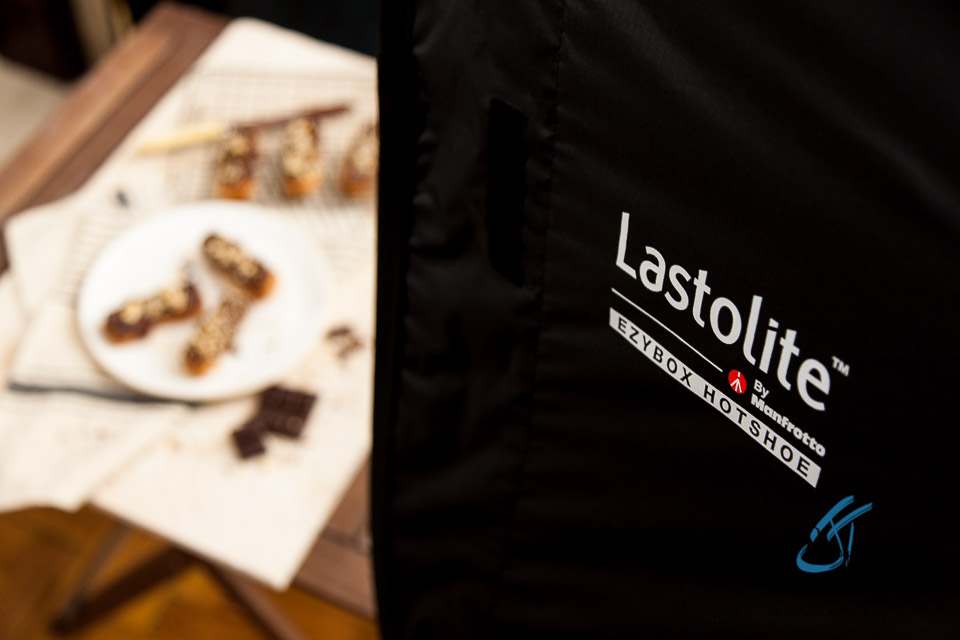 Speedlites also spelt Speedlights, are not cheap unless you go the Yongnuo route. I know plenty of people who swear by them and don’t need what the more expensive flash units have. One Canon 600 EX RT costs about the same as 3 of the Yongnuo equivalent, so you can see the appeal.

I use my Speedlites in softboxes to shape the light, corral the light and change the quality of the light. You can get adapters for just about any softbox and light modifiers to fit with speedlites. The issue you will come across with the larger light shapers is, it’s a lot to ask of a small flash to fill a big light shaper and still give you the pop of light you need. I’ll do a post on my favourite light modifiers, their pros and cons, in the coming weeks.

Why I use a modifier

The great thing about this is, food is generally small, although my time in Canada reminds me that size is relative 😉  Therefore you don’t need massive light modifiers to get a nice look. The next shot used a Speedlite in a 76cm square Ezybox Hotshoe. 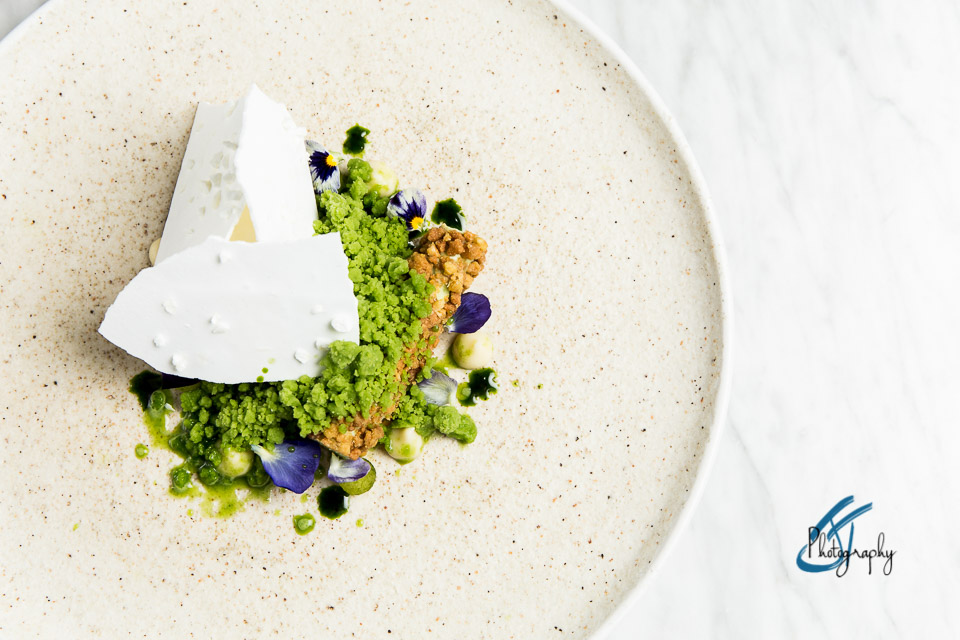 I take my speedlites to every shoot. Their small size and light weight make it easy to fit them into your kit without any trouble. You get a surprising amount of light from them. One of the best demonstrators of speedlites has to be Joe McNally, there’s almost nothing he hasn’t used them for. Joe shoots Nikon and although their system is a little different to my Canon kit, light is light and it’s how he uses them that’s amazing. For all things Canon Syl Arena is your guy, here’s his latest book and of course when I think of Mr Canon, it’s my buddy Brian Worley who knows the Canon systems better than anyone I know. As for the Phottix, I don’t have any experience with them but my buddy, Glyn Dewis has been using some of their kit for many shoots which you can read about. Brian Worley has been taking some Phottix kit for a test drive and mixing it up with Canon kit to see how it all works together. Keep an eye on Brian’s blog for that.

When I’m shooting food on location or in our studio there’s always plenty of light on tap with small flash. Shoot them into a nice softbox and the light quality is beautiful. Usually, the lights are in close so light power isn’t an issue. They’re quick to re-position and move around too. Being battery powered there’s no cables and plugs to worry about, this is a big plus when you’re shooting in a restaurant, often when they’re open. 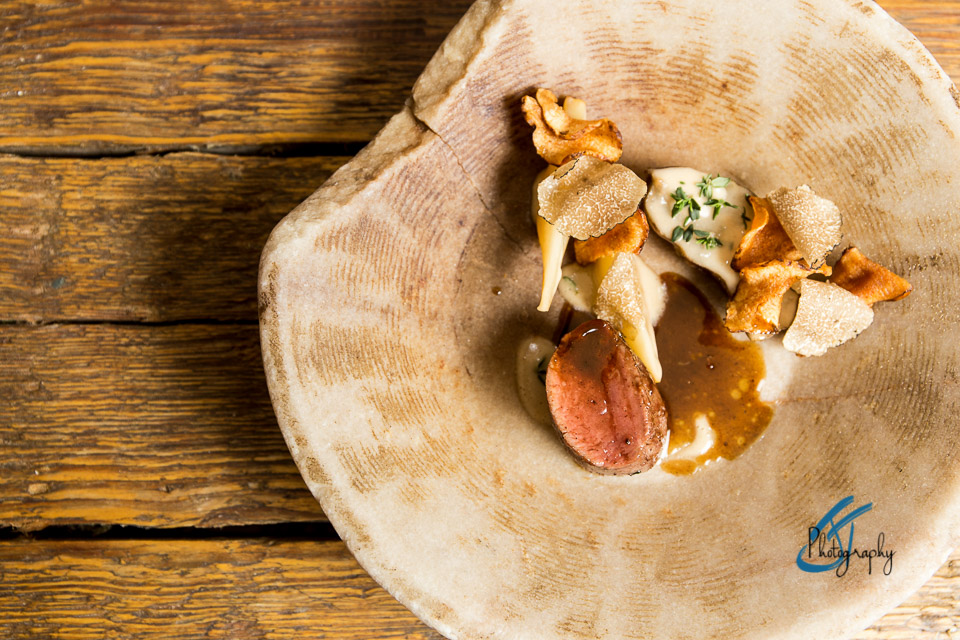 There really aren’t too many cons when we talk about speedlites and food photography. The main thing that stands out is the cost. Apart from the Yongnuo flash, they’re all pretty pricy. They pack a whole bunch of technology inside them that many studio strobes don’t have. If you needed lots of light, shooting in bright sunshine, for example, you may need more power than a single Speedlite can provide. You could double them up, but with the more expensive flash, it gets a bit pricy. One studio head can be cheaper than the branded Speedlite. It’ll be much more powerful but not able to talk to the camera which speedlites do as part of their functionality. Although some top end studio strobes are becoming really cool and working in a way previously only speedlites did.

Small flash typically runs off AA batteries and it can be an issue. I run mine on Eneloop rechargeable batteries, they work so much better than regular batteries, and of course, they recharge. I rarely run my batteries down on a shoot, there’s always spares but food photography isn’t about shooting fast bursts, so it’s not something I’ve had to worry about. You can add external battery packs to power them if you think you’re going to need plenty of power, time and time again.

The last thing I can think of which some may find negative is that small flash, like speedlites, can feel quite complicated to operate. They have so many different functions it can get a little overwhelming to find your way around the menu. Once you get the hang of it it’s no trouble at all. I’m not sure about the non-Canon systems but I often make changes to the speedlites via the camera menu, where it tends to make more sense to me. 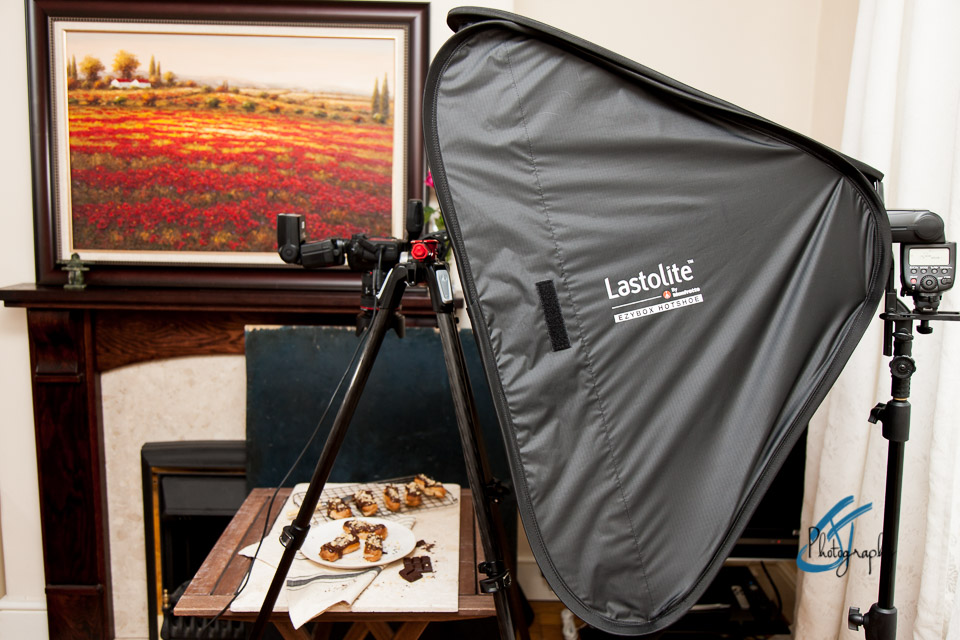 How do I use small flash?

I always use some kind of modifier on my Speedlites for food photography. I can achieve beautiful soft window light from different times of the day, different angles and consistent light output. I’m sure most of us have used natural light, through a window and found it can be anything but consistent. The sun burns at a pretty consistent brightness it’s all the stuff in-between the sun and your food set up that causes the changes.

Here in the UK window light can vary by 3-5 stops of light which is huge. It also goes from lovely buttery soft to hard, hard blasting light. When you use small flash the light is consistent, generally doesn’t vary in power making postproduction so much easier and quicker. Also later in the year, the days are pretty short so relying on natural light drastically limits shooting time and options for commercial work too. Sometimes I mix natural light with flash, other times I remove the natural light via the magic camera setting pixies and the only light in the picture is from my small flash.

Currently, I’m using Lastolite products mostly. The large Ezybox Hotshoe, large Ezybox II Octa and the Ezybox Speedlite II. Sometimes I use a strip box and grids on the softboxes to help control the light direction further. Depends on my mood and what I want to achieve.

On any commercial photography enquiry, I get asked if I use flash or just natural light. I know there are many food photographers who like to say they are strictly natural light photographers. To me, that says I don’t know how to use flash, not I prefer natural light. They make flash photography out to be some satanic ritual which they would rather have their heads boiled in oil before touching it. Some also get on their high horse about flash photography being inferior to natural light shooting. That just says I’m scared of flash, which is silly. You know what’s scary? Walking into a job and not having the tools to come out with the goods, no matter what the situation.

Am I saying you have to know how to use flash to be a food photographer? Of course not. Many photographers commercial and not, only shoot in natural light but I tell ya, it’s great fun to learn, greatly widens your creativity, lets you shoot when the sun is shining somewhere other than your studio and brings consistency to you light making it easier to achieve the look you want. I know I’d rather go to work with a full bag of tools, ready to take on any challenge.

There’s no argument, natural light can be so very beautiful. The light that fills our little house is glorious, we’re always commenting on it and it never gets old. I come to this as a photographer, not a cook or chef. It’s my chosen craft and part of that craft is learning to light no matter what the source of light is. 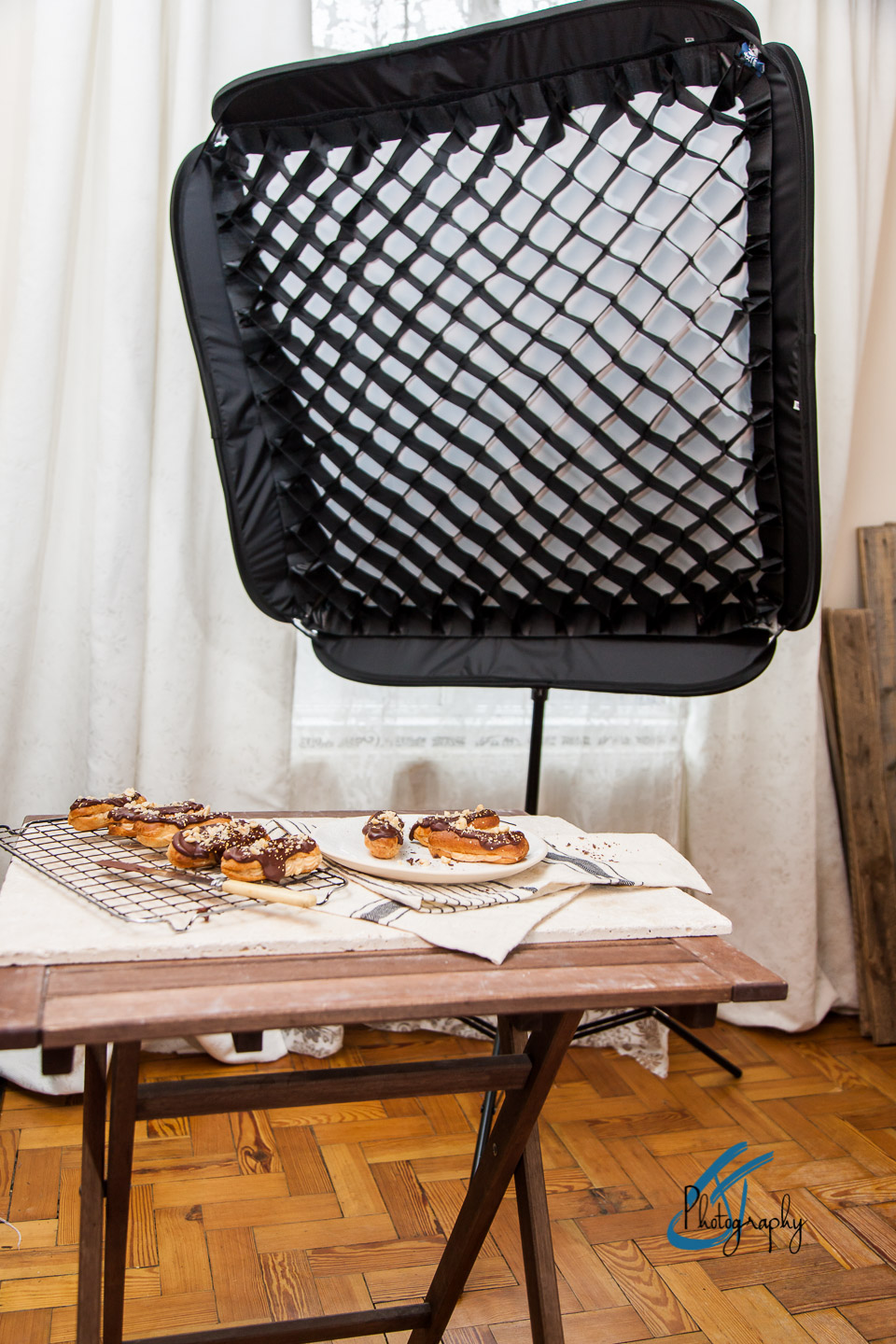 Have I convinced you that small flash in your food photography can be a blast and nothing to be scared of? I bloomin hope so. I will be producing a video to go along with all these posts. Sometimes that’ll make it clearer to understand. I just have to get my time scheduled better and get it done. Now there’s another story.

Here are the main points.

If you’re interested in any other kit I use there is a What’s In The Bag post which I’ll be turning into a kind of resource page with links and updates.

I hope it all made some sense. Do you have any questions? Leave them in the comments below, I’d love to help.

That’s all, for now, folks, I’ll be back with more foodography fun very soon.

2 Comments on “Small flash in food and restaurant photography”