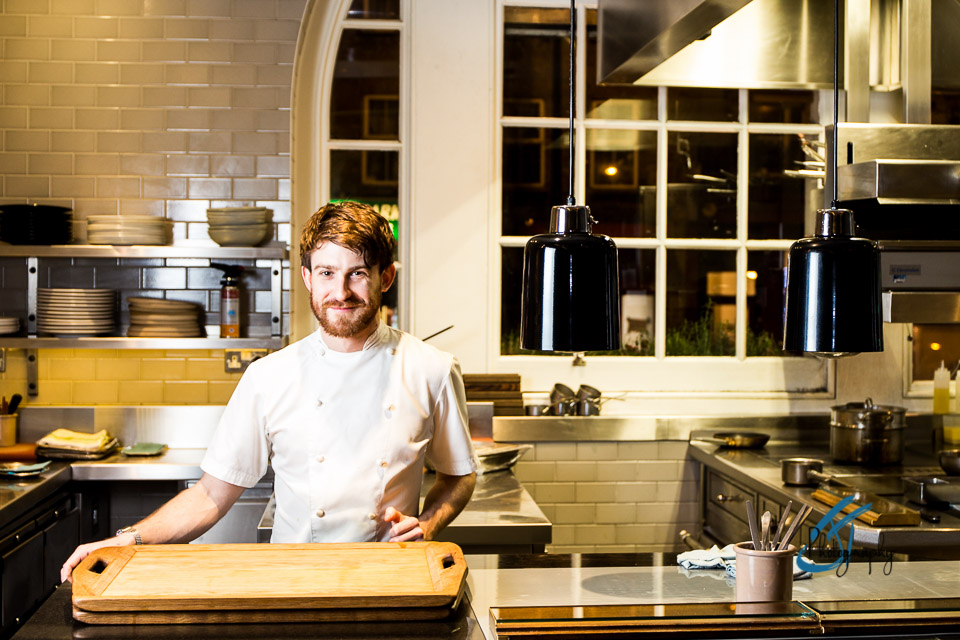 This is my third post about my use of flash in food and restaurant photography. This time we’re going to talk about using the flash duration to freeze your subject and get a sharp image when using a longer exposure.

In January I was in London shooting for Art Culinaire magazine, a really stunning quarterly publication from California. One of the restaurants we were going to be working in was Typing Room, Bethnal Green owned by the hugely talented chef, Lee Westcott.

I was excited to be photographing such beautiful food which Lee and his team brought to me. The light of the day was beginning to dim and it was going to be a shoot that needed lighting. One Speedlite in my trusty 76×76 Lastolite Softbox and a Trigrip reflector to bounce some light into the shadows to give them a bit of a lift. 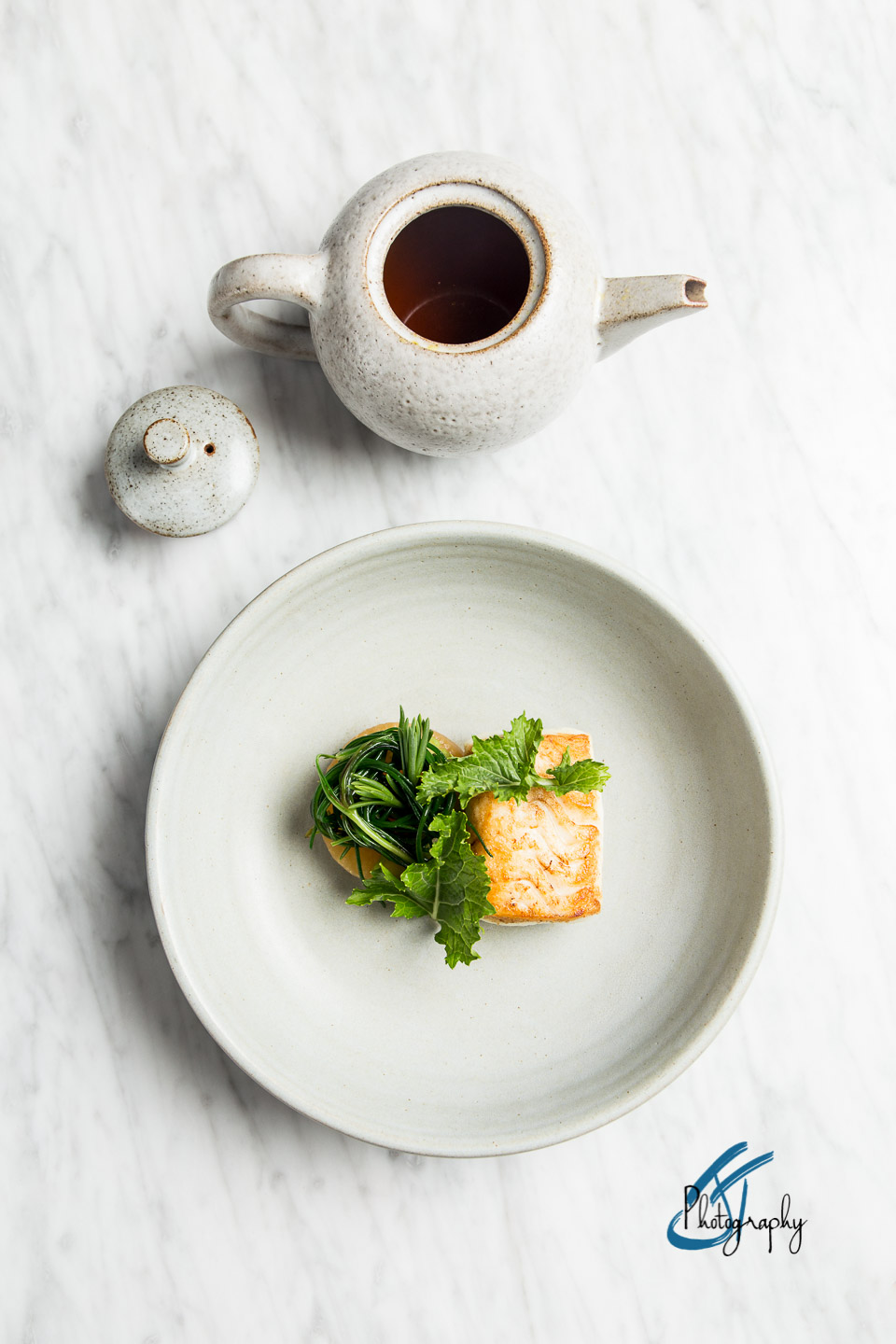 I’ll share with you some of the dishes I captured in another post as I want to get to the meat of this one. After the dishes were photographed we needed a couple of portraits of Lee. As is often the case, he hated his portrait being taken so I was in for a bit of a challenge.

First off I went dark and a bit moody, mainly with the idea to do a black and white conversion. Using the same softbox, I brought it in close, feathered off towards camera, so just the back edge was lighting Lee. Dropped the ambient light to black. Seconds later we have a portrait he loved. Awesome! 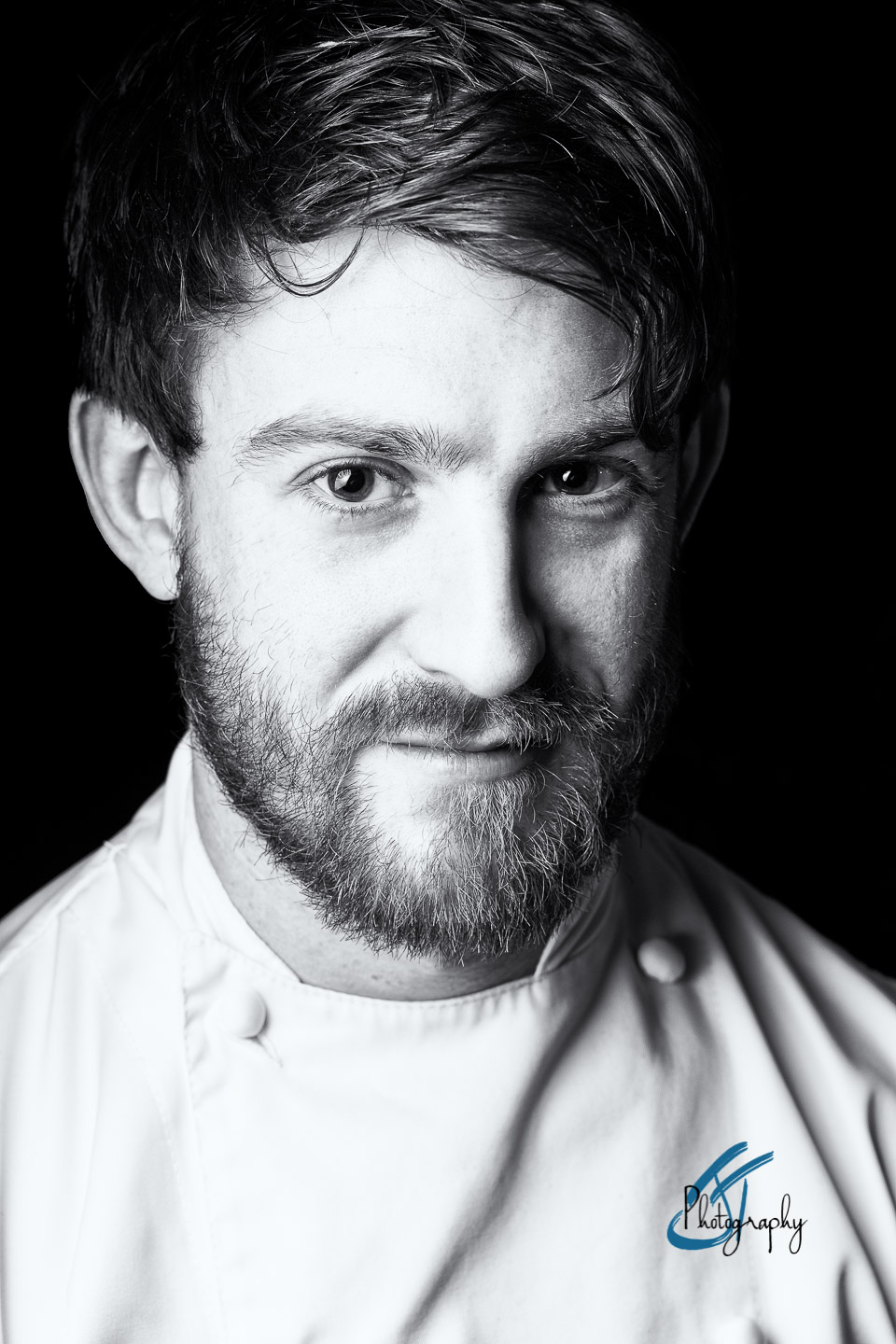 We wanted to get a second shot with Lee in his open kitchen, after all, if you came for dinner that’s where you’d see him in action. Now by this time, we’re approaching the time Lee needs to head off and deal with a multitude of other things, so I don’t have much time. Certainly not enough time to set up an elaborate lighting shot. This is where using my flash would seriously help me out.

In restaurant photography, I’m used to working in challenging lighting situations, but I don’t often have to push things too far. I get totally in the zone and focus on nothing but getting the shot. I asked Lee to stand in his kitchen, at the pass, looking straight at camera. This was going to be more of an environmental portrait, my favourite.

The same single Speedlite and softbox were placed just out of frame to the left. This was going to be my key light on Lee. I needed to bring in a whole bunch of ambient light from the kitchen area. I also wanted to let in some of the street light from the window behind him, giving an extra level of depth to the image. My file needed to be clean so I kept the ISO down to 400.

There was no time for tripods. I was fairly wide at 40mm on my 76×76 Lastolite Softbox. Aperture wide open. Image stabiliser well and truly on. The first couple of shots dialled in my flash power. Then I used my built-in reflective light meter to judge how much of the ambient I was getting. Several clicks down on the shutter speed, of which I didn’t even look at, mostly because I knew it was going to be a bit slow. Tucked in my elbows. Held my breath. Got my focus and rolled off a couple of frames.

Cherrrrtuck. Cherrrrtuck. Flash was firing, good.  Still not daring to look at the setting I reviewed the couple of pictures I’d just taken. They were sharp and exposure good. I zoomed in on the back of the camera… Yep, sharp. Went through a couple more frames with Lee shifting his expression and position a little. We got it!!

I’m not sure if someone next to me said it or it was in my head… “That shutter was sloooooow” I reviewed the shots one more time. Yep, we’re good to go. Then I took a look at my settings ISO 400, f4, 1/15. The combination of awesome image stabilising on my 24-70 f4L lens and the flash duration delivered exactly what I needed.

This is definitely a technique you’ll want to get familiar with in a more comfortable environment. When you need to pull it out of your bag of tricks and get you that shot, it’s a doozy.

That’s all for today, catch you back here for more food and photography fun.

If you have any questions drop them in the comments below, I’d love to hear from you.

Have a great weekend