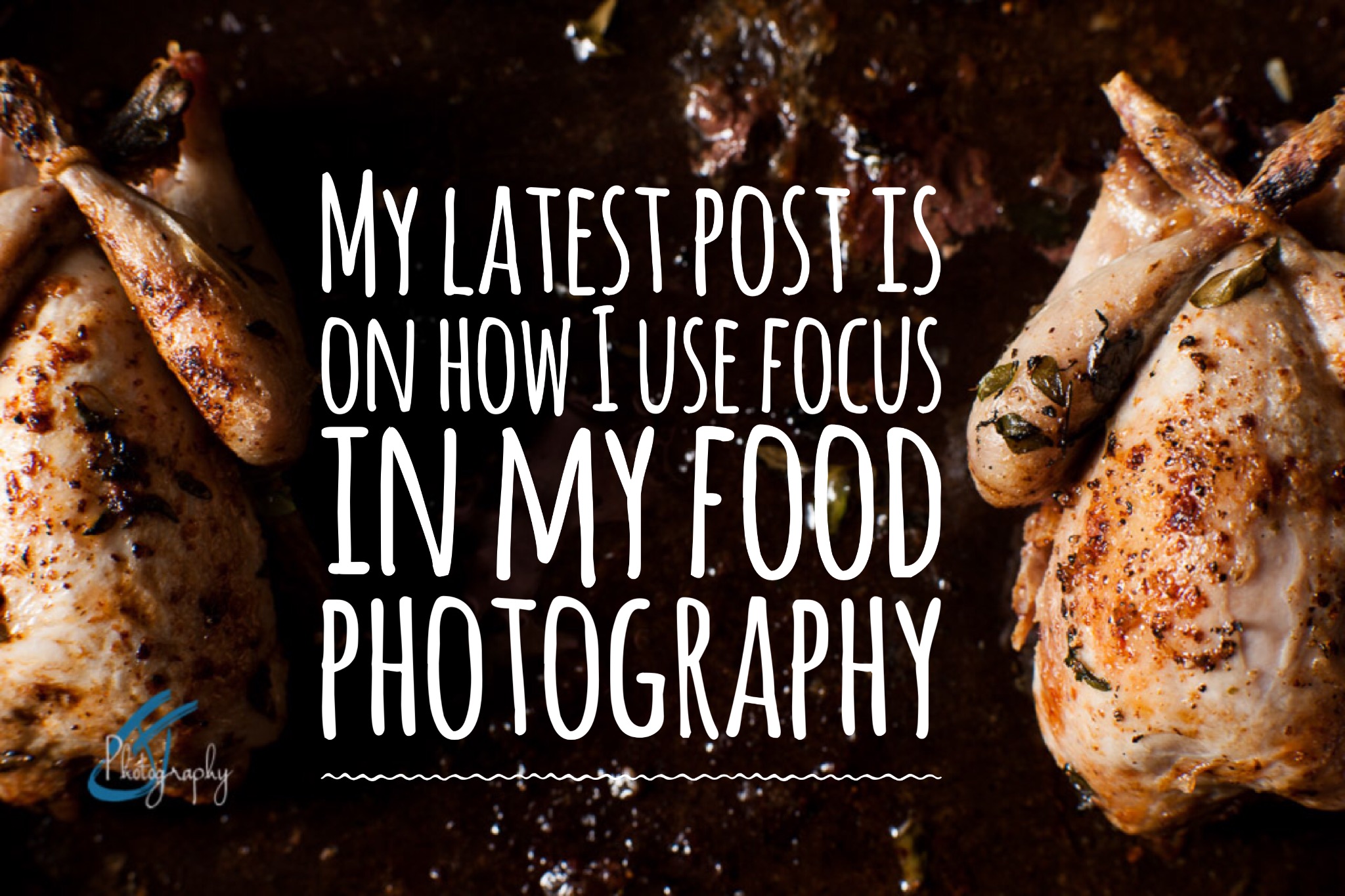 Hi everyone, I missed you last week but I’m back with a few words on where I focus in my food photography, why I do this and how it affects the image.

What part does your focus play?

Below I’ll list the main points you want to keep in mind when taking pictures. These focus points are relevant for all your shooting not just food photography.

Where do you focus?

There’s no right or wrong answer to this, it all depends on the subject matter and what you find pleasing. I’ll give you photo examples and explain what my thought process is with similar photos as regards to focus. As a rule, the parts of a photograph the creator wants you to look at are 1: In sharp focus and 2: The lightest part of the image 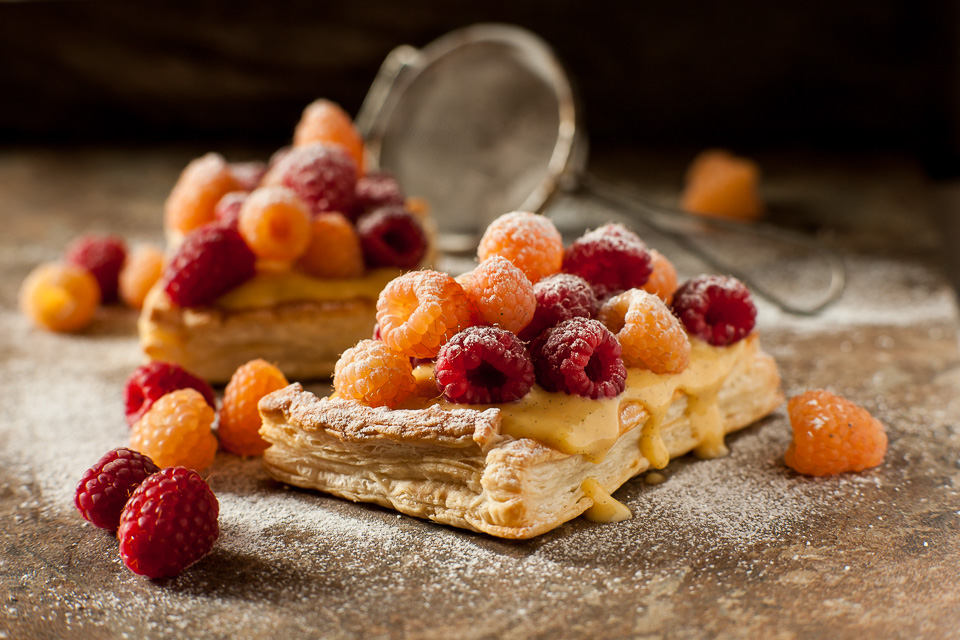 Last of the Summer Raspberries

In this shot of red and golden raspberries on puff pastry and creme fresh, my focus is on the front most red raspberry. My aperture is f5.6 and I’m fairly close in. This creates a nice soft focus of the foreground raspberry and the second tart falls into an even softer focus. The main subject is the front tart and that’s where I want you to look. Although I wish I’d turned that raspberry around these days.

If my focus had fallen in-between the two tarts or onto the very front raspberry, the viewer’s eye wouldn’t know what to look at. The brain knows it’s supposed to be looking at the tart but the focus is telling them something else. This makes it uncomfortable for the viewer and they don’t like it.

As humans we look at something, focus on it and that’s what’s important at that time. If you focus on something in front of you, say your hand, notice how all that’s behind it goes out of focus. If something in the background moved, you’d most likely focus on that instead, throwing you hand out of focus for that moment. 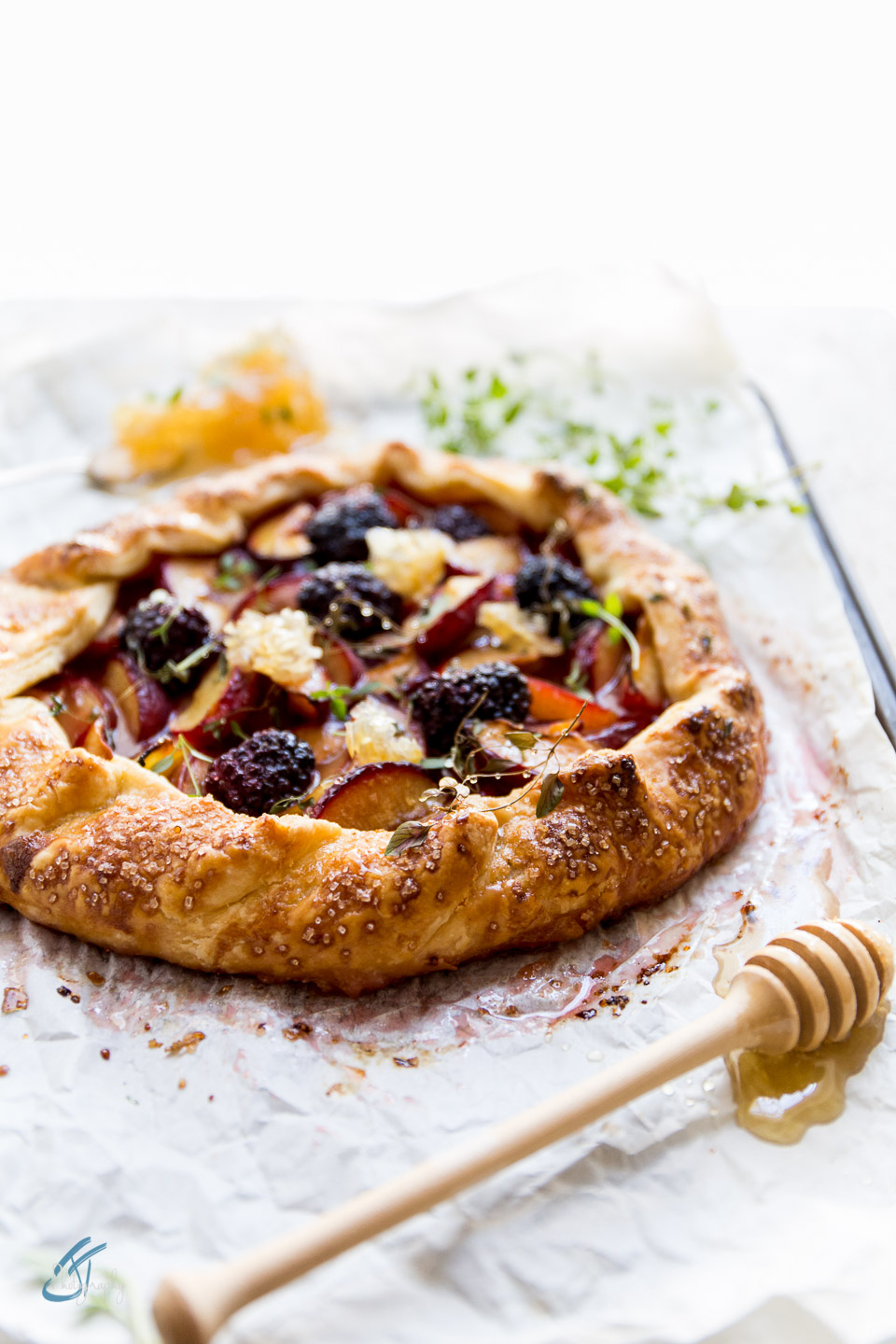 In this peach and blackberry tart, I’ve focused in a similar way, throwing the honey drizzler mostly out of focus. Why? Because it’s not what I want them to look at but it is a relevant element which your brain registers as part of the story. The elements in the background now become graphical elements. Your brain can make a guess as to what they are but it knows that’s part of the story but not the main event. 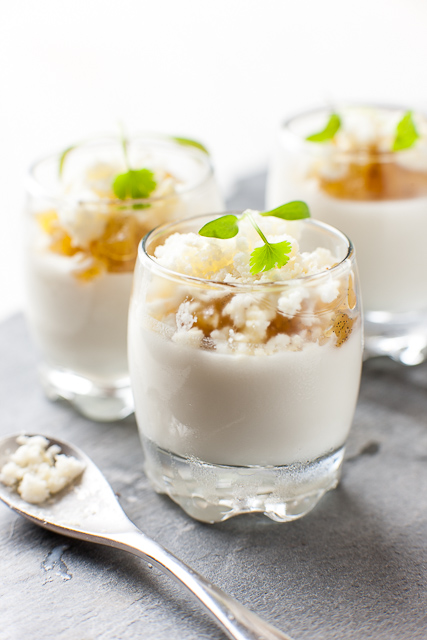 When I line up multiple of the same dish, as in this case with kaffir lime panna cottas, the focus has to be on the front item when you shoot at this kind of angle. You know the other two are the same dish so you don’t need to see them sharp. As the shooting angle increases and you come more over the top, it is possible to focus on the 2nd item as the distance of each of the items are now similar a distance to the camera.

Large items in the foreground of your image, which are out of focus, can often be distracting to the viewer. You need to move them out of the frame allowing a clear view of the subject. Even with the subject in focus, it will feel like you’re trying to see around a large object in front of you. This can happen when you’ve styled a shot to be taken top down. When you move camera position, to grab a few extra shots, the set up may get in the way of your main subject. Don’t be afraid to move things around to shoot the different shooting angle.

I’ll talk more about styling up your food photography and orientation in a future post.

Here’s what we’ve covered this time…

That’s all from me today. I hope this has been helpful and as always, leave any of your questions in the comments and I’ll get right back to ya. Incidentally, if you fancy making any of these yourself, pop over to Salted Mint and take a look through the recipe archives.

See you back here very soon

6 Comments on “Where to focus in food photography”